Rotary announces $34.8 million in funding to fight polio in Africa and Asia 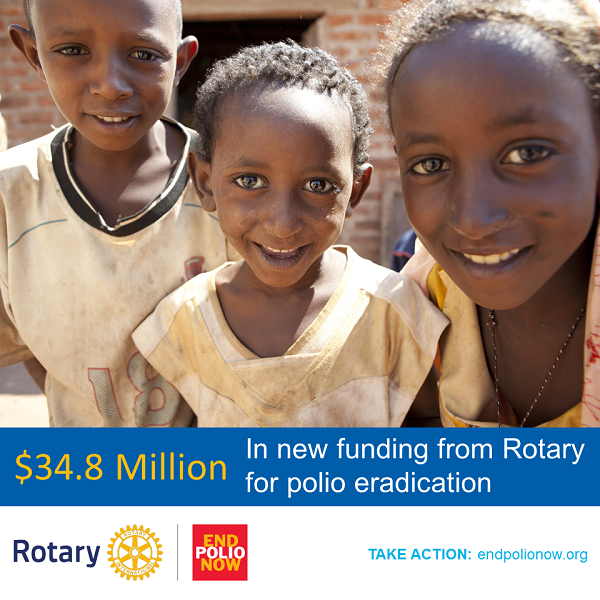 The continued fight to eradicate polio gets an additional $34.8 million boost from Rotary in support of immunization activities and research to be carried out by the Global Polio Eradication Initiative. The funds will be used by the World Health Organization (WHO) and UNICEF for polio immunization, surveillance and research activities in ten countries, as well as to provide technical assistance to additional countries in Africa.

In 2014, the world saw significant progress against polio in most places. Nigeria – the last polio-endemic country in Africa – saw a nearly 90% reduction in cases in 2014 over 2013, with the last case recorded six months ago. In addition, more than half of the world’s polio cases in 2013 were the result of outbreaks in previously polio-free countries, largely caused by instability and conflict in countries such as Syria, Iraq and Somalia. These outbreaks appear to have been stopped in 2014 following special vaccination efforts in 11 countries, reaching more than 56 million children.

The exception to this progress was Pakistan, which saw an explosive outbreak which resulted in more than 300 cases in 2014, the highest number in the country in more than a decade. As a result, Pakistan accounted for almost 90% of the world’s cases in 2014. In 2015, Pakistan has the opportunity to reverse that trend and in doing so, help the world end polio forever.

The progress made against the disease in 2014, while significant, is fragile. Rotary’s funds will support efforts to end polio in the three countries where the disease has never been stopped: $8.1 million in Nigeria; $1.1 million in Pakistan and $6.7 million in Afghanistan.